The strategic position of the camping lets to reach in short time a lot of the main towns of artistic interest in Tuscany. 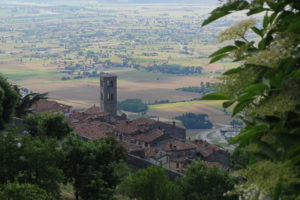 Just 12 km from the camping away, surrounded by vineyards and olive groves Cortona rises on a hill rested on S’Egidio Mount, overlooking one of the best panorama of Italy. Perched at 500 metres above sea level, Cortona dominates the entire Valdichiana, with a view that stretches as far as Monte Amiata. Founded by Etruscan, Cortona rises entirely surrounded by fortifications, its typical tiny streets, houses, churches and monasteries remind Middle Age and Renaissance period. Cortona was homeland and destination of a lot of Saints and Artists, like for example San Francesco d’Assisi, who founded here Eremo delle Celli; or Luca Signorelli and Pietro Berrettini who left the marks of their genius. To visit: Palazzo Comunale, Palazzo Casali (Museo dell’accademia), Corso Nazionale, Via Iannelli a typical medieval street know as Jesus Road; Santa Margherita sanctuary. Don’t miss to take part in the famous grilled steak festival!!!! 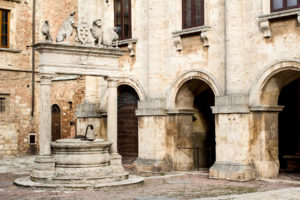 Just 25 km from the camping far, Montepulciano “Renaissance Pearl”. The very interesting town of Montepulciano, named “Pearl of ‘500”, has to be visited not only to admire its art and architectural treasures but also to test its fantastic and delicious red wine: Vino Nobile and to fit the body with its thermal bath. The city is constructed along a ridge, which varies in level of between 50-60 metres and is reflected along the 1½ kilometres of main central street, that starts at the Porta al Prato and goes up to the Piazza Grande: the houses are arranged along the main street and in a series of short and narrow streets, often steep and more or less perpendicular. Almost all the buildings of major importance appear along the main street and constitute a long series of facades almost like an exhibition of high level design. The growing wine in the area is very high, as the pleasures of the Nobile di Montepulciano wine have been known at least since the 8th century AD. Montepulciano, the town that produced Poliziano, is a fantastic tourist destination with a lot of interesting monuments, like Piazza Grande, Pozzo de Grifi e dei Leoni, Palazzo Comunale, Palazzo Cantucci, Palazzo Nobili Targhi, Palazzo del Capitano del Popolo, Palazzo Tarugi del Vignola, Palazzo Avignonesi, Palazzo Gagnoni Giugni del Vignola, Palazzo Cervini; Duomo and several churches. Not to be missed the famous festival: Il Bravio delle Botti (last Sunday of August). 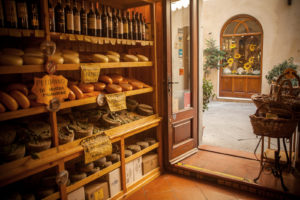 Just 30 Km from the camping away, situated in the heart of Val D’Orcia, Pienza is a typical medieval village which became a town according to the wishes of Pope Pio II. In that occasion the village until then called Corsigliano was named Pienza. Pope Pio II tried to model the town according to the model of XV century. Today Pienza is famous for its typical production of sheep cheese. To visit: Casa dei Canonici, Palazzo vescovile, Palazzo Piccolomini, Palazzo Comunale, Via delle case Nuove… 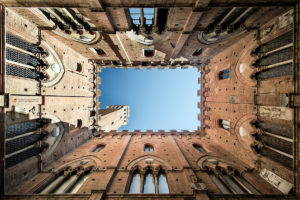 About 60 Km from the camping away, Siena is easily reached by train or by car. Surrounded by an enchanting landscape, full of important art, architectural and historical monuments, Siena is one of the most beautiful town of Italy. Risen on the top of three hills, Siena is crossed by wide and narrow streets, which lead to the heart of the city: Piazza del Campo and to all the other cultural buildings like for example the Dom and Spedale di Santa Maria della Scala. Famous for the Palio, an historical horse rice, that takes place every year on the 2th of July and on 16th of August, Siena is also the base of some oldest universities of Europe. Siena offers a lot of daily cultural events, concerts, cinemas, theatres and a lot of sport activities. Siena has always been devoted to its tradition and to its land. For this reason arose here schools and particular traditions, which had made Siena a cultural microcosm: for several years it had its personal calendar.

Situated at 40 Km from the camping away, Arezzo everywhere famous for its goldsmith’s art, lies on the hillside among Casentino, Valdarno and Val di Chiana. It is a little jewel surrounded by thirteenth Walls, where the first Sunday of each Month takes place a typical antique market. Arezzo has an Etruscan origin, it was allied of the Romans, but the building of that time had been destroyed by barbarian Invasions. It may have been one of the twelve most important Etruscan cities, the so‑called Dodecapolis; the famous Chimera of Arezzo, now in Florence, was found here. As Arretium it was a flourishing city in the days of the Roman Empire, well-known in particular for its pottery manufactures (Arezzo ware, bucchero). During the Middle Ages, much of its earlier architecture was dismantled to reuse the stones for fortifications. Arezzo was an independent city-state from the 11th century until 1384, when it was incorporated into the Tuscan State of Florence. From this beautiful city come lot of famous figures, like for example Petrarca, Vasari, Aretino. 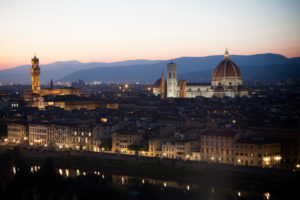 About 90 Km from the camping away, Florence is easily reached by train Terontola-Firenze. It is the city symbol of the Italian Renaissance, homeland of famous artists, sculptors, painters, writers, poets, from Dante Alighieri to Michelangelo Buonarroti, from Giotto to Petrarca. Monuments, museums, drawings, architectural treasures make this city one of the most beautiful of the world. Visiting Florence you can admire Giotto’s bell Tower, Brunelleschi’s cupola, Piazza della Signoria with its important statues, the characteristic Ponte Vecchio from which you have a fantastic view on Lungarno, the famous churches of Santa Croce, Santo Spirito, Santa Maria Novella, the famous Galleria degli Uffizi full of important paintings, Piazzale Michelangelo, Palazzo Pitti, Giardino di Boboli, and Corridoio Vasariano one Km long realized by Vasari over passing the city (starting form Palazzo pitti, to Uffizzi and Ponte Vecchio). 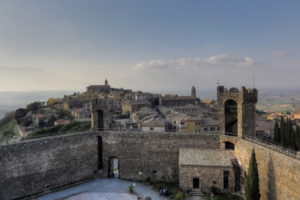 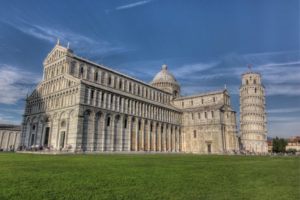